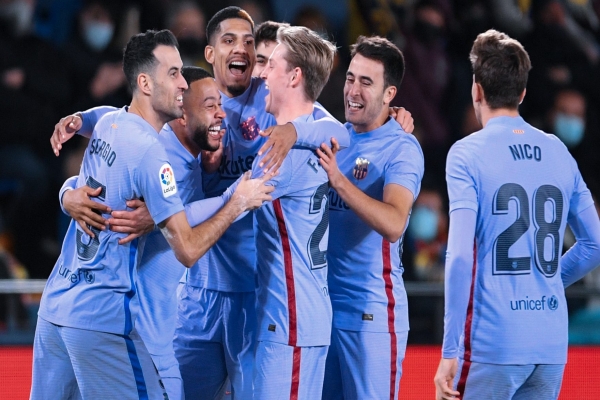 The Blaugrana beat Villarreal 3-1 at the Estadio de la Ceramica on Saturday with Frenkie de Jong, Memphis Depay and Philippe Coutinho all getting on the scoresheet. That was first away victory of the season in LaLiga for Barcelona as they made it two wins from two under Xavi Hernandez.

It was an eventful evening with late winning goals, controversial referee decisions and managerial clashes in the tunnel.

Xavi Hernandez made only two changes in his starting lineup. Eric Garcia was replaced by Clément Lenglet and Abde Ezzalzouli replaced Yusuf Demir. Depay was again at the top of the attack.

Frenkie de Jong opened the scoring in the 48th minute but Samuel Chukwueze came off the bench to level and set up a frantic final 15 minutes.

In the 88th minute Ter Stegen kicked the ball,Pervis Estupiñán tried to return the ball with his head to his goalkeeper, but Depay fought for her with Albiol, bypassed Rulli and restored the lead of the Blaugrana. In added time, substitute Coutinho won a penalty after a foul by Juan Foyth. It was the Brazilian who shaped the final result with an accurate performance from the penalty spot.

The coach of the winner of the trophy in the Europa League Unai Emery had serious claims to several refereeing judgments and claimed two penalties in favor of his team – in the first half, when the ball met the hand of Gerard Pique, a situation not reviewed by VAR, and Eric Garcia’s foul against Raul Albiol in the penalty area in the second half, which was also overlooked by the refereeing team.

Apparently this had caused a serious controversy between the two coaches Unai Emery and Xavi Hernandez after the match in the tunnel of Estadio de la Ceramica, which became so heated that it was necessary for police officers to stand between the two for fear of a physical confrontation.

With the victory Barcelona climbed to 7th place in the standings with 23 points, while Villarreal is in 12th place with 16. Next opponent for Barca is the pleasant surprise of the season Real Betis at Camp Nou this Saturday.