Messi and Griezmann on form in 4-0 win over Granada 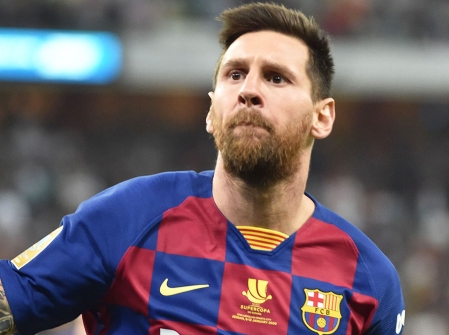 Lionel Messi and Antoine Griezmann scored two goals each for the easy success of Barcelona with 4-0 over Granada as a guest in a match of the 18th round, with which the Catalans already have 10 wins in La Liga. The Frenchman opened his scoring sheet in the 12th minute and Messi secured the three points with goals in the 35th and 42nd. In the 63rd Griezmann scored once again. The first two Barcelona goals were debatable, as both times the referees ruled in favor of Blaugranes. The first goal Granada players insisted on an offside by Griezmann, and in the second their claims were for a handball by Sergio Busquets.

In the last 12 minutes Granada players were one man down after a direct red card for Jesus Vallejo, who fouled Martin Braithwaite when he was last man in defense. Koeman had made only one change in the starting 11 compared to the match against Athletic Bilbao. Oscar Mingueza instead of Clement Lenglet in the center of defense. However, Ronald Araujo was injured in the warm-up, which forced the emergency entry of Samuel Umtiti. Lionel Messi again led the attack, assisted by Pedri, Ousmane Dembele and Griezmann. Busquets recorded his match №600 for the club.

Granada again relied on the attack of the former Real Madrid striker Roberto Soldado. This is the third defeat for them in the last four rounds.

Barça did not start confidently and in the second minute ter Stegen had to intervene after a very dangerous shot by Antonio Puertas. Ronald Koeman’s players got their first chance in the 11th minute when Pedri found himself in the penalty area, but his shot was inaccurate. A second later, Los Cules took the lead. Busquets tried to find Messi, but the ball hit Soldado’s body, then ended up in Griezmann, who was behind Granada’s defense. The Frenchman did not flinch and scored. The referee did not respect the protests of the home players, who insisted that an offside should be ruled. Dembele nearly doubled Barca’s lead in the 16th with a powerful diagonal shot.

Barcelona doubled the score with goal in the 35th minute, but he was also challenged by the team from Granada. In prior attack, the ball bounced in the hand of Busquets, Barca recovered the ball and an attack followed, in which Griezmann passed to Messi, who easily handled it into the net for 2-0.

The lead of the Catalans became expressive in the 42nd  minute, when Messi scored from a direct free-kick, cunningly shooting low on the ground with the ball going under the wall for 3-0. In the 63rd minute Messi once again received a pass from Dembele and from the air increased to 4-0.

The match was practically over and a lot of substitutes appeared on the field. Riqui Puig and Martin Braithwaite showed in the 78th minute, after which the Dane found himself alone against the goalkeeper, but was fouled just in front of the penalty area by Jesus Vallejo. For this violation, the defender received a direct red card.

Next week, Barcelona will try to win the Spanish Super Cup. The tournament is based on a new formula with the participation of four teams. In one of the semi-finals on Wednesday, Ronald Koeman’s team will face Real Sociedad, and the next day Real Madrid will clash with Athletic Bilbao. The final is on Sunday, with all matches in Andalusia.