Barca ends the year with another disappointment 1-1 with Eibar 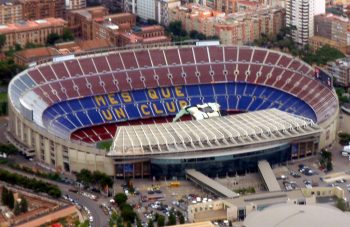 Barcelona again disappointed their fans and ended their nightmarish year with a 1-1 draw at home against Eibar in a match of the 16th round of La Liga. The Catalans continue their unconvincing performances and stay away from the leaders in the table. Martin Braithwaite missed a penalty in the eighth minute. In 57th horrible mistake by Ronald Araujo allowed Kike Garcia to give a lead to Eibar. Ten minutes later, the recovered Usman Dembele equalized, but by the end Barca failed to score another goal.

In the last seconds Philippe Coutinho was injured. There is a real danger that Barcelona midfielder will miss the next four months. According to official information, it is a damage to the lateral meniscus of the left knee. The club added that surgery is needed, and therefore the Brazilian will undergo arthroscopy in the coming days.

In the absence of Lionel Messi, Ronald Koeman give chance in the attack to Martin Braithwaite, Antoine Griezmann and Pedri. The Catalan coach again deployed a tactic with three central defenders Ronald Araujo, Oscar Mingueza and Clement Lenglet.

Just after five minutes of play Araujo was fouled in the penalty area after a corner. He reached for the ball and was kicked by a clumsy Bigas. After reviewing the video replay, the judge awarded the penalty. Martin Braithwaite shot past the crossbar and missed the brilliant goal opportunity. The goalkeeper had chosen the same angle, but did not have to play with the ball.

The guests from Ipurua created tension with several corners in front of the goal of ter Stegen. In the 25th minute Braithwaite sent the ball into the visitors’ net. However, the goal was not counted due to an offside. The Danish striker received a good pass from Junior Firpo and finished with one touch, but the result remained 0-0 after the intervention of VAR.

At the break Kuman replaced Dest with Ousmane Dembele. The French winger sharpened the attack. In the 51th minute he created a great opportunity, but was blocked in the penalty area. Two minutes later, Griezmann shot from 20 meters – goalkeeper Marko Dmitrovic saved. In the 56th , Pedri gave a superb pass to Dembele in front of the goalkeeper. However, Ousmane shot at the goalkeeper’s body.

A minute later, the Basques scored after a blunder by Araujo. The defender was confused in the center of the pitch and as the last in defense allowed Kike Garcia to rush forward with a ball past him. The attacker of the scored with an accurate shot against ter Stegen 0-1.

Koeman reacted with a double substitution – Trinkao and Coutinho for Miralem Pjanic and Griezmann. In the 67th Barcelona responded with an equalizer. The Catalans built an attack from the left, Junior crossed a low ball that reached the far post. Dembele directed it with slik movement in the net for 1-1.

In the 71st minute, Braithwaite almost scored a curious goal after the goalkeeper punched the ball into his stomach, but went out of bounds. In the end Pedri missed a great chance shooting over the crossbar from 12 meters. In the added time Trinkao took the ball in the penalty area, went around two and shot diagonally, but it was wide.

Eibar won a historic first point at Camp Nou. Barcelona closed a nightmarish year for themselves, in which they won nothing, lost 2-8 to Bayern and Lionel Messi filed a notice to leave.

Messi talks about the future with Barcelona
No more room for losses, explicit Koeman