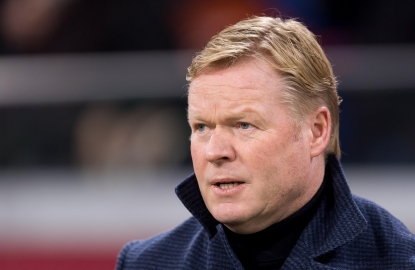 “We can’t drop many more points. We can’t lose another game if we want to fight for the title. Every dropped point is a missed chance.”, stated Barcelona head coach Ronald Koeman in interview post Eibar 1-1 disappointment.

Barca are already 10 points behind the leader Atletico Madrid and have a game more than the leaders. “We are 10 points back and you can’t say we are going to win the league”, added Koeman.

He also commented on the topic with Lionel Messi and the fact that the captain can now sign in advance with another club. Leo missed the last game because he suffered of a minor injury. “He is doing well. He trained on the 30th and 31st , while the rest were off”, spoke the coach about the fitness of Messi.

Asked to comment on the contract situation and future of Messi, Koeman answered: “He has shown that he wants the best for this team. I don’t see any problem if he doesn’t decide now. We don’t have to be nervous or worried.”

“Like any player whose contract is ending, he is free to decide what he wants and how he wants.”, said of the Dutchman.

Philippe Coutinho injury was another big topic in the post Eibar game conference. “It’s bad luck. We already have several long-term injuries. For me he has always been important. He has to recover. We have to see how we can make up for Coutinho’s loss”, was the coach’s comment.

Philippe Coutinho’s surgery was successful and according to official information from Barcelona he will return to play in three months. This is good news, because until now it was thought that the Brazilian would be treated for at least four months.