Two for Messi in 3-2 win against Athletic Bilbao 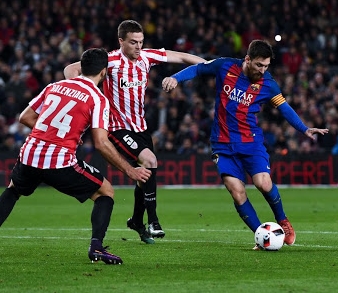 Barcelona won 3-2 their visit to Athletic Bilbao in a postponed match of the 2nd round of La Liga. Lionel Messi has scored two goals for the Catalans and already has 10 since the beginning of the season, equaling with Gerard Moreno from Villarreal at the top of the list of scorers.

The hosts from Bilbao were led by their new coach Marcelino Garcia Toral. He replaced Gaizka Garitano, who was fired a few days ago, although the Basques won at San Mames against Elche (1-0). Athletic continues to perform hot and cold this season and ranks 9th in the standings, already with a negative goal difference. It is a curious fact that none of the last five coaches of Athletic had made their debut in La Liga with a loss, but Marcelino failed to continue this trend.

The news in Barca’s squad was that this time Antoine Griezmann was a starter. The Frenchman was preferred to Martin Braithwaite to lead the attack alongside Messi and Ousmane Dembele. The three in the middle of the field were Sergio Busquets, Frenkie de Jong and Pedri, and the defensive line in front of Marc-Andre ter Stegen was formed by Sergino Dest, Ronald Araujo, Clement Langle and Jordi Alba. Gerard Pique, Ansu Fati, Sergi Roberto and Felipe Coutinho were out due to injuries for the Catalans.

Barça came in 3rd in the standings with 31 points – 5 less than second-placed Real Madrid. The match was not easy for Ronald Koeman’s team. An early goal by Inaki Williams in the 3rd minute gave the Basques the lead, but Pedri equalized in the 13th , and in the 38th after his pass Lionel Messi scored a second goal for Barça. The Argentine was accurate once again in the 62nd minute, and at the end of regular time Iker Muniain returned one goal. With a two-goal lead, Barça had no problem playing the ball, and the hosts were too tired to press aggressively.