Antoine Griezmann off-pitch efforts to be a leader at Barcelona 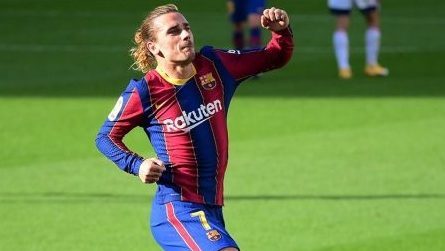 Antoine Griezmann is playing his second season in Barcelona, but he still can’t reach his potential with the club’s team. With his behavior on the field, he gives the impression that he is not confident and lacks self-confidence. Still, it turns out that he’s taking steps toward better integration into the locker room. AS notes that he has recently impressed his teammates with two appearances, which is why they are already looking at him with different eyes.

On November 24 after the victory over Dynamo Kiev in the Champions League Griezmann stood in front of everyone and sang “Happy birthday” on the occasion of the birthday of the young Pedri. The other significant event of the world champion was on December 22. Then he took on the role of Santa Claus and delighted all his teammates with gifts from the luxury brand “Louis Vuitton”.

Earlier last month Antoine Griezmann has announced that he is suspending work with his longtime sponsor Huawei. The Barcelona striker is disappointed with the information that the software of the Chinese technology giant for facial recognition helps the Asian country to locate representatives of the Uighur Muslims – Turkic people living in northwestern China. Huawei expressed regret over Griezmann’s decision and asked to discuss the issue with him in a personal conversation. A year ago, it became clear that confidential documents from the Chinese Communist Party revealed details of the persecution of Uighurs in northwestern China.

During the season so far, the former Atletico Madrid player has 5 goals and 2 assists in 20 games in all tournaments.

No more room for losses, explicit Koeman
Two for Messi in 3-2 win against Athletic Bilbao